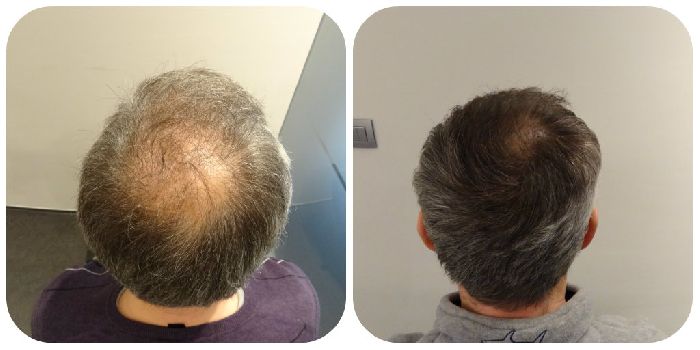 wow, couldn’t believe my eyes! It does seem like a promising quick fix. Got more to show?

I don’t believe this, how is this possible with tattoo ink? I would believe this if you told me he used toppik, can tattoo ink really create this effect?

Easy. You get SMP and then comb your hair up from the back to cover the bald spot (same concept as a combover).

Sarcasm aside, It’s too bad the angle and hair direction are not honest so that we can really see the effect of the SMP.

This video was shot at 25 frames per second. Each frame represents a picture.
The top of the head is slowly shown from the worst possible angle : above.

bart
ps: please remember that we are an HT - SMP institute, we are not a professional video company.

My general tip would be to make the after shot as close to the before shot as possible. If you look at the two pictures in your first post, you will see two differences in the after picture. First, the patient’s head is tilted forward, so that the bald spot is not fully visible. In the before picture the head is titled back exposing the full bald spot. By having the head titled forward in the after shot it gives the appearance of more hair.

I can only say, that the concealer “dermmatch” which is applied to the scalp, camouflages the scalp in a very similar way. I know it is 2-dimensional and hard to believe but I really suggest you try this out yourself with dermmatch. In fact I much prefer dermmatch to toppik.

[quote][postedby]Originally Posted by hair101[/postedby]
How is this possible? Tattoo is 2-dimensional, there is no way tattoo can create the effect of growing hair in the crown that are several inches long. I can understand if someone go for the buzz cut look using tattoo but no way can tattoo create the illusion that there is growing hair several inches long!![/quote]

Pictures are a disgrace.
An insult to everybody who spends a moment on this thread.
What a joke!!

The after has a tilted forward combover.
What a joke.
Shame on you Bev, disgrace to the clinic you represent.