good to see Dr. Woods post again, I thought you had long retired

he could have, had he played his cards right and patented his FUE/BHT invention, then charged a royalty $$$$ on every procedure performed.

Yes, it is depending on where you go. There is tons of places out there that do a good job. FUE: No bleeding, no scaring and no pain that’s why people prefer fue. Now if you are planning on having a hair transplant. I’d recommend somewhere like Megahair trans. Thats where i did mine

There is bleeding because there is cutting of tissue and some pain.

From the very beginning, I new there had to be a better way.
In the 1980s I saw the most horrific HT results.
I was well aware that doctors used small punches to experiment on and examine hair follicles since the early 1900s
Nothing new about that

The challenge was NOT to remove a few follicles for an experiment
The challenge was to remove individual follicuar units to create a new and less invasive natural hair transplant with minimal trauma and transcection…a transect means follicle destruction…and revolutionise the industry by eventually doing large numbers, preserving the donor …

So, I kept the sessions small…if I got around the follicles I made 40 …max

If a another patient came in, and the transections were one after the other… I stopped…charged nothing …but did no harm

The Strip Boys were scarred…I was about to disclose , reveal and end their bloody gravy train

Yep’…it was a lttle punch… but its not the size …its how you use it…guys, we all heard that one before

In 1996 it was aired on national tv, and then again in 1999.
The first bht was 1998…extensively documented. It takes years, but in 2003 BHT was published in THE BRITISH JOURNAL OF PLASTIC SURGERY
It was on Ripleys Beleive it or not in 2003
The first beard hair was 2000 on timetested
And please go through the archives… when it came to bht, I repeated, iterated and reiterated…WHAT YOU SEE IS WHAT YOU GET…it is true that body hair can increase in length on the scalp. but it is proportional from where it came from and not predicable
Now. there are good well meaning soles ares trying to rewrite history but please go through the archives and research

The next doctor in the world to try FUE was Dr Jones, Canada, late 2002. Then came Dr Cole in 2003, And Avind in 2004
I never wanted to patent FUE or BHT…I made it perfectly clear that this is bloody hard, but in the right hands …the best

There are small white dots, and there is some bleeding…if there isnt…I suggest you call an ambulance and check your disclaimer and insurance policy, because you are working on a corps

Of course, FUE hair transplant is successful. All you have to take care that hair transplant surgeon you are visiting is experienced & he chooses appropriate hair loss treatment for you.

@asghairtransplant16 is it true that you stole Dr. A’s patient photos?

What major do you take to be a hair transplant surgeon?

We hoped to give them time to remove pictures but it seems they haven’t been removed still.
We suspect that pictures of other reputed clinics also feature on their gallery. 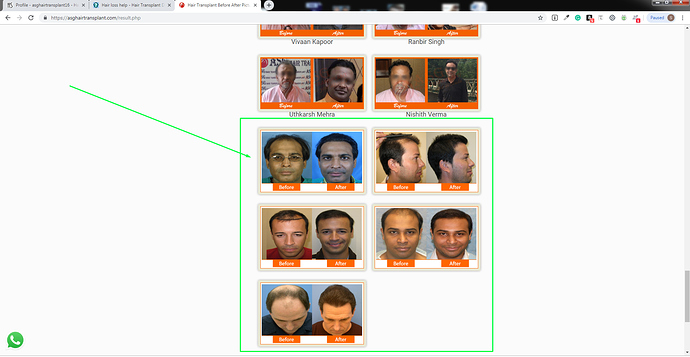 In1988 I was inundated by these HT clinics

By sheer luck…I met the guy behind the scam

But they got away with it

The scam works till this day

but much more sophisticated

@asghairtransplant16
I see that you are still shamelessly posting here when you have been exposed for stealing photos from another clinic. Bravo

FUE hair transplant procedure is considered to one of the most effective and successful way of restoring your hair. Get in touch with one of the best dermatologists who can guide you properly.

Hair transplantation is more successful than over-the-counter hair restoration products. But there are some factors to consider: Anywhere from 10 to 80 percent of transplanted hair will fully grow back in an estimated three to four months.