I found this on the internet - Why worry about hairloss

Somewhere in America, Stanley Tucci is yelling at his agent. Bruce Willis is crying in the arms of his latest hot young girlfriend, Ben Kingsley is planning some passive resistance and Patrick Stewart is setting his phaser on “stun.”

Timothy Olyphant plays Agent 47, the bald assassin in the new action movie “Hitman.” The controversy? Why have the well-coiffed Olyphant shave his head when there are so many bald actors who are perfect for the role?

Casting a haired actor to portray the iconic bald video game character is like hiring one of the Olsen twins to play Mama Cass in a Mamas & the Papas biopic. And it’s not the type of thing that the offended parties will just ignore. One thing about bald dudes: Years of dealing with sunburns, razor accidents and hearing bad Mr. Clean comparisons creates a lot of pent-up rage.

The choice of Olyphant as the “Hitman” is an ugly blemish in what was shaping up to be a really great year for the bald guy. The dream that started with “The King and I” actor Yul Brynner - sort of the Henry Ford of bald celebrities - was finally coming to fruition.

Two and a half decades ago, bald men basically had two choices for A-list role models: Ed Harris and Ed Harris. Life with damaged follicles got a little bit easier when I started going bald during my last years of college in the 1990s: There was a short period where Willis and Demi Moore both had no hair.

But in the past five years or so, bald celebrities have thrived like never before. Even with advances in hair restoration, more and more actors seem to be willing to let nature take its course. “Law & Order: Special Victims Unit” star Christopher Meloni has become a great baldness role model. So has Terry O’Quinn from “Lost.” And have any three haired men kicked more combined butt in the past decade than “Transporter” wheelman Jason Statham, “Pitch Black” killing machine Vin Diesel and “Snakes on a Plane” vengeance-layer-uponer Samuel L. Jackson?

Baldness is making a comeback in national politics, as well. Judging by the most recent polls, it’s looking more and more like we’ll have the first bald president since Gerald Ford left office 30 years ago. (Whatever you think about Rudy Giuliani, he did ditch that sacrilegious comb-over. And am I the only one who’s convinced that Hillary Clinton is going to shave her head like Sigourney Weaver in “Alien 3” if she gets elected next year?)

Choosing a baldness role model is no longer a decision among Dwight D. Eisenhower, Telly Savalas and Harlem Globetrotter Curly Neal. Potential bald role models are now so plentiful, they fall into multiple categories. Here are a few:

The Haberdasher: Favored by many musicians, including U2 guitarist the Edge, Rush drummer Neil Peart and former San Francisco Mayor Willie Brown, the haberdasher sees their hair loss as an opportunity to develop a really awesome collection of stylish headwear. This doesn’t work as well for younger guys. (See: Matt Drudge.)

The James Garfield: When I saw Matthew McConaughey wearing the full beard and shaved head in “Reign of Fire,” I thought it looked ridiculous. Then I saw “Hustle & Flow” director Craig Brewer do the same thing, and it started to grow on me. Baron Davis will definitely rock this look if he ever starts losing his hair.

The Sipowicz: Popularized by “NYPD Blue” star Dennis Franz, former Pittsburgh quarterback Terry Bradshaw and wrestler Hulk Hogan, the Sipowicz practitioner decides that everyone else has the problem - and they’ll continue to wear what hair remains on the sides and back at least an inch long. Moustaches are popular with these bald guys, as are black leather jackets.

All of the above progress makes setbacks including the Olyphant/“Hitman” controversy even more catastrophic. Between that and the other iconic moment in baldness pop culture history that happened earlier this year, it could take years to recover.

We’re talking, of course, about Britney Spears’ head-shearing incident, which wasn’t just a sign of many failed rehab attempts to come - it was a cringe-inducing moment for bald man everywhere. When that happened, I suddenly knew how orthodox Jews felt when Madonna started babbling about Kabbalah. Can you think of a worse ambassador for your cause than a flaky pop star who loses custody of her kids to Kevin Federline? (Spears’ baldness was only salved by the memory of Natalie Portman’s shaved head for her “V for Vendetta” role. Or, as I like to call it, “my happy place.”)

Looking for someone to help make sense of the world again, I called the Obi-Wan Kenobi of bald men, baldrus.com founder Tony Snesko. (Phil Collins is the Yoda of bald men, but his number was unlisted.) Snesko pointed out that more famous people have been willing to embrace baldness in recent years - including two young “American Idol” contestants - and each one helps decrease the stigma about being bald. But he says a regular guy deciding to ditch his wig or comb-over can make their mark on the world, too.

Snesko, who lives in Washington, D.C., officially accepted his baldness in 1991, during a trip to San Francisco. Before a dinner party, his wife, Valerie, offered to fix his hair. Before he knew what had happened, she took a lady’s disposable razor to his scalp, and removed the few straggly combed-over strands that remained.

“It took her courage to do that,” Snesko says. “And I’ve been thankful ever since.”

Snesko’s Bald R Us site is sort of the Wall Street Journal of bald guy Web pages. Among its features is a Bald Man Hall of Fame, which includes everyone from actor Ken Watanabe to philosopher Michel Foucault. Snesko has declared Brynner as the Bald Man of the Century and promotes the deceased actor’s July 11 birthday as an international baldness holiday.

“As you can see on my site, Yul Brynner was the guy who really broke it open for men,” he says. “But in the 1990s, Bruce Willis was one of the first ones to make it really acceptable, even though he has gone back to hair on occasion.”

The baldness advocate doesn’t have any anger in his voice when he talks about Willis’ decision to take roles with hair. Snesko also turned down my encouragement to lead the bald masses in an uprising against the makers of “Hitman” - and won’t be writing so much as an angry letter. While a more tempestuous bald man might fly into a rage upon seeing an actor with hair take a bald man’s part, Snesko says Olyphant can be a bald guy role model, too.

“Whenever they portray bald people on the screen, one way or the other it’s going to help people struggling with hair loss,” Snesko says. “I don’t have any problem with wannabes. As a matter of fact, I think it’s a compliment.”

– Two Cents asks who’s your baldness role model on B5. To see the first ballot inductees into the Bay Area Bald Guy Hall of Fame, check out the Culture Blog at www.sfgate.com/blogs. 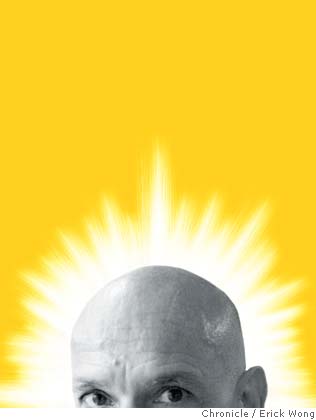 Bruce Willis is crying in the arms of his latest hot young girlfriend, Ben Kingsley is planning some passive resistance and Patrick Stewart is setting his phaser on "stun." Casting a haired actor to portray the iconic bald video game character is...