Cure for hair loss has arrived - Shiseido results are in

Well, from what they’re claiming it looks like Replicel can revitalize, and therefore protect, your intermediate hairs. I suspect that also means Replicel can protect your terminal hairs as well. If Replicel can do that for everyone that gets the treatment that’s better than Minoxidil or Dutasteride or finasteride because none of those 3 treatments can guarantee to revitalize/protect every person’s intermediate hairs and terminal hairs. I lost hair while I was on minoxidil + Finasteride. Plus, there’s also the issue that Replicel may be able to revitalize/protect your intermediate hairs and protect your terminal hairs in one treatment so you won’t have to put messy stuff into your hair twice a day anymore, and you won’t have to take hormonal altering drugs anymore if you use Replicel instead of minoxidil + finasteride or dutasteride.

How strong do you think the revitalization is if it only lasts 9 months?

Another thing to consider about this is that originally, we thought that Replicel could be compoundable. That is, even if results of initial treatment were minimal, you could repeat the treatment maybe 2, 3, 4, 5 times and get much better results, perhaps up to a full head of hair.

Now we know that’s not going to be true at all because if results of one treatment go away within 9 months, it would be pointless to have a booster treatment (at great cost) within that 9 month period. That investment too will be washed down the drain soon.

JarJar, I’m with you on your take on minoxidil and finasteride. Now I think it is quite pathetic to rub your head twice a day and then sprinkle your menu with some impotence boosting substances.

I also agree that Shiseido waisted 4 years. Basically, they bought license to technology this, spent 4 years doing what? And they retutn the same technology this. The most astonishing thing that they spent 4 years on working with 1cm2 area. This is the area that Replicel worked on to establish safety and proof of concept. But I agree that for us it would be better if they released the product on to the market. And I’m sure if it was some biotech start-up in India or Bangladesh, they would do exactly that. But with Shiseido reputation, I can’t see them willing to tarnish their reputation. And Shiseido is big enough to write this failed venture out as insignificant losses. But for Replicel ? I thought I was going to say kaputt. But then I remembered that they have some other back-up projects in their pipeline. As far as I remember they also develop technology to repair tendons.

Judging from the cells and methods involved to develop hair loss treatment, there is no reason not to believe that they are not using differentiated cells relevant to human tendon tissue. So it is very likely that they are getting similar results. If that is the case, I’m afraid Lee Buckler and R. Hoffman should seriously consider looking for new job. Perhaps they could now apply for some sales manager position at Shiseido promoting Shiseido’s current stock like wigs and similar.

And perhaps this is where they would find themselves at their very best.

It would be a great substitute for Rogaine or Finasteride if it actually worked well… But clearly, it doesn’t. I’m sure those before/after pictures they posted were the absolute best results they got. And their best results are just a minimal, transient increase in number of visible hairs.

Maybe I’m missing something, but how are these disappointing results anything to get excited about?

How are you all ?
Did’t we get better results during past years ?

I’m not saying Shiseido will market this treatment. As a matter of fact, I think they won’t market it but I think there might be a market for this product.

So from my perspective if Shiseido will definitely arrest my losses that would be an improvement over Rogaine and Finasteride. Also, it sounds like Shiseido is saying that this tech can thicken hair shafts that have thinned somewhat. Are they saying they can turn intermediate hairs back into Terminal hairs?

Likewise most people who use Rogaine and Finasteride could say those treatments are nothing to get excited about.

Yes, these results are definitely nothing to get excited about. Shiseido’s treatment does not work well. And it’s certainly possible that most before-and-after pics you see with Shiseido’s treatment are their best results but we don’t know that for sure yet. Perhaps 100% of Shiseido’s patients got the same result. We need a more information about that issue because the basis for why I think there might be a market for this product. What I’m saying is that:

This is not a major accomplishment but it’s also not a tiny accomplishment either. And no other treatment has accomplished that before. Plus, if Shiseido can do this with an objection once every 9 months then it would be easier to do the treatment than Rogaine + Finasteride. Plus we don’t know yet if they could improve on that 9 month timeframe. Maybe they could tweak it and make it last longer.

In no way am I saying that Shiseido is the “big one”. What I’m saying is that depending on the responder-rate details + how much it would cost + could Shiseido optimize/maximize the treatment so it lasted a few months longer than 9 months, there could be a market for this technology.

But Jarjar they haven’t presented any evidence that it does anything like what you’re describing. In fact if you look at their results, not everyone even responds to their treatment. At best, the results are minimal. THAT IS AT THE VERY BEST. At worst, there are no results at all – same as Rogaine, Finasteride, etc. In fact, the actual profile is very similar to Rogaine and Finasteride, in the middle of the Bell curve. But at the “high responding” end of the Bell curve, Rogaine and Finasteride perform much better.

That combined with the fact that results go down to zero within 9 months, even in the best responders (which remember, show minimal visible response themselves), means this treatment is not worth it.

Weak, transient results even in the BEST responding subjects. No results at all in a large chunk of the subjects.

I don’t see how that jives with your statements about strengthening intermediate hairs and all that. Sure, I can easily envision a treatment that could do all those things you’ve described, BUT THIS CLEARLY ISN’T IT!

Well, I have a lot going on right now so I didn’t read all of the info about the study. Now that you’ve given me the data on the study’s rate of success I no longer view this treatment as marketable. Replicel & Shiseido never should have begun this study until they were able to preserve inductivity in the cells. RCH - 01 is dead. It just doesn’t know it yet.

They won’t get the funds to be able to license or scale it. Shiseido signed a contract with Replicel to market this in Asia, but I’d be surprised if they go ahead and do that, especially since Shiseido has its own in-house hair cloning research going. Shiseido has this Japanese patent

Personally I don’t see how culturing DP cells in the presence of PRP will permanently change the DP cells, so that they become inductive, but that appears to be what their patent is about.

Can you share the link where it says they are running parallel study on hair loss.
You might be right but does it make sense to have two parallel studies in the same office?

One link that describes the parallel studies is here 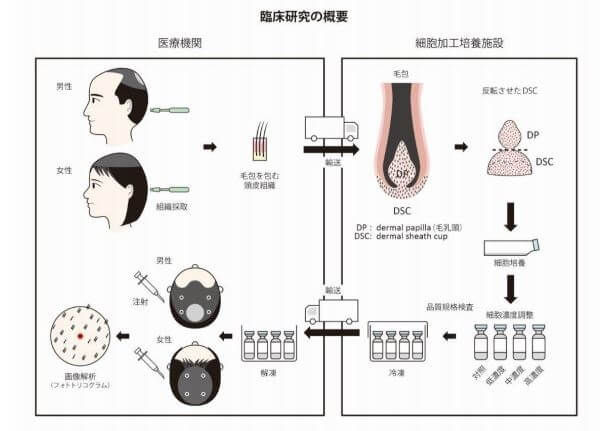 If Shiseido Decides to Do So | Hair Loss Cure 2020

Although this has been known for a long time, and has been discussed everywhere. I think it confuses a lot of people because when people say “Shiseido” a lot of people think Replicel. They tend to forget completely about Shisedo’s in-house project.

The Replicel research isn’t being done inside of Shiseido. It is only a licensing deal that Shiseido signed with Replicel, years ago. The research work is being done by Replicel itself.

Shiseido is also funding its own hair cloning research using scientists it has employed itself. The patent I posted above refers to that, but there has been a ton of information on the Shiseido in-house project posted here and on other sites. As far as I know, they are keeping the two projects entirely separate.